Although the early informal games of the young boys in these years were treated in a light-hearted manner to start with, enthusiasm grew and keen rivalry soon developed between the various new teams. Written challenges with team names listed were issued and games played regularly on the racecourse on Thursday afternoons and some weekday evenings under the same arrangements as the Senior clubs.

In the years from 1888 onwards the rapid growth of rugby as a sport in New Plymouth saw numerous new informal teams of younger player forming as follows:

In 1889 the older boys of the “Starlighters and Pirates” formed themselves into the Star Rugby Football Club and this club performed with such credit and received such strong support from players and supporters that it soon displaced the original New Plymouth Rugby Club as the biggest club in town. Significantly the majority of the members belonging to the Star Club were selected from players who lived to the east of the Huatoki river. A couple of years later a new senior club was to form based around players who resided mostly to the west of the Huatoki.

Photo: The original Tukapa team of 1892

During 1891 the older and more mature young men who had congregated as part of the young groups known as the “Moonlighters” “Irish Town” and “Tukapa”, and who lived mainly west of the Huatoki river, found that there was no room for them in the teams fielded by the Star Club and so they eventually decided to have a meeting to discuss whether they should form another senior club which could field a team of players capable of measuring up to the standard of the other established senior clubs playing at the time i.e. Inglewood, Clifton, Star, Tariki, Maunganui and Stratford.

Accordingly, the first meeting was held in 1892 in the shed of Webster’s Store at the western end of the Salvation Army Barracks on the corner of Brougham Street and Powderham Street where the Salvation Army Citadel now stands. This shed was owned by W. D. Webster who was a general merchant and agent for the Northern Steamship Company and the name of Webster continued to feature prominently in the Tukapa Club from its formation right through to the 1990’s.

At this meeting it was decided to form a Rugby Football Club and officers were elected as follows:

From that meeting onwards there has been a rugby club in Westown known proudly as Tukapa which has flourished ever since.

The origin of the Tukapa name (as told by an old Maori source) is that local whaler Dicky Barrett required men to stoke the fires under the whaling coppers he operated on Ngamotu Beach as part of his long established whaling station. The process involved stripping blubber off whale carcasses and then rendering the flesh down into oil by boiling it in large copper vats. Apparently one of the men who worked the coppers was a longtime resident of what is now Westown. Eventually this character became nick-named as “two coppers” after the work he was so well known for doing. Somehow over time the nick-name had morphed into the word “Tukapa” and gradually the district where “two coppers” lived also became known as Tukapa. Subsequently, the Geographical Board in Wellington made an inspection of the Survey Map on which this district was marked as Tukapa. No Maori word or meaning could be found for Tukapa so the Geographical Board changed the name on the Survey Map to Tukapo – a Maori word which later became the name of the main road through the growing district of what became known as Westown. The street continued to be spelt as Tukapo until 1968 when it was corrected back to become Tukapa Street.

Getting the right name for a new club could have been real challenge given that the new entity was formed by a merger of three existing groups of players. As legend has it the naming of the present club as Tukapa came about more by accident than design.

At the original 1892 meeting in Webster’s premises in Powderham Street, when the name for the new club was being discussed, Harry Langman who was an accomplished player on the tin whistle, said he would play a tune while the others concentrated on thinking up an appropriate name.

Harry Langman came from Westown, then known as Tukapa, and when he finished playing someone in the meeting shouted: “Good Old Tukapa.” Immediately it was unanimously decided that the Club would be known as the Tukapa Club and so it has remained.

The first meeting which formed the Tukapa club in 1892 decided on colours of navy blue jerseys, white knickerbockers down to (and sometimes below) the knees and navy blue socks. The name, Tukapa, was hand stitched in white letters across the front of the jersey. However ,at the annual meeting in 1893, the navy blue jerseys were changed to narrow blue and white hoops, with the hoops being about 2 inches wide.

In 1929 “black pants” replaced the white “knickers”. In 1949 the “black pants” were replaced by white shorts. By the 1920’s the blue and white hoops had become a lot wider than the original hoops being approximately 4 inches compared with the original English-style of approximately 2 inches. In 1974 it was decided that the uniform of the Club should be blue and white jerseys and royal blue shorts. 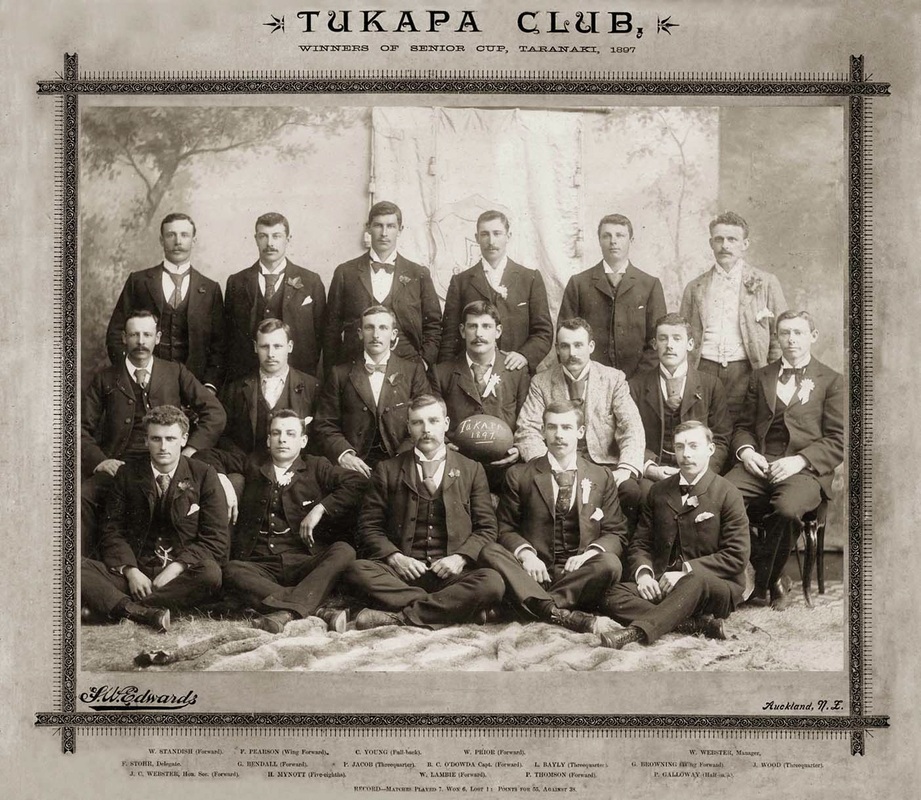 Heading into the Tukapa Centenary in 1992, the Club had won 53 afternoon grade championship titles as at the conclusion of the 1991 season. Since then the Club has collected another 18 titles to bring the tally up to 71 in total in the years 1892 to 2017 inclusive.

Prior to 1980, the Colts (U21’s) were referred to as Third Grade; altogether the Colts have been our most successful grade with 18 Taranaki titles up till 2016 including six in a row during the 1930’s.

Not to be overlooked either is the success of two other age group teams fielded by the Club back in the days when teenage sides were a feature of club rugby and not the monopoly of secondary schools i.e. our Fifth Grade (U16’s) team, who won championships in 1936, 1837, 1955 and 1961 as well as the Under 17’s who won championships in 1988 (with Lyndon Bell as coach and Greg Wood as captain) and in 1990 (with Hank Harrison as coach and Greg Plimmer as captain).

Our two longest-serving afternoon grade coaches have been former All Black Charlie Brown who coached the Senior A’s for 18 straight seasons between 1922 and 1939 inclusive (winning four championship titles along the way) and Wayne Penn who coached the Senior Fourths (which became the Senior Thirds and are now known as Division Two) for 18 consecutive seasons from 1998 till 2015 collecting eight championship titles during his stint as coach.

As noted above, Tukapa RFC has won an overall total of 71 afternoon grade championship titles in the 125 years 1892 to 2017, with the most successful teams being: